Coloring a Canvas:  IN CONVERSATION WITH TO THE YELLOW HOUSE ACTOR BROOKE ISHIBASHI, AND MY THOUGHTS for 3views on theater

Jesca shares her thoughts on questions around the essentiality of art by reflecting on her experience of the world premiere of playwright Kimber Lee's play to the yellow house at La Jolla Playhouse and speaking with Brooke Ishibashi, one of the lead actors in the production.

Jesca was recently name a 2021 Woman To Watch on Broadway by the Broadway Women's Fund. As announced on Playbill, "The Broadway Women's Fund has announced their second annual “Women to Watch” list, including a number of emerging performers, playwrights, directors, stage managers, songwriters, and designers. The list was launched in 2020 by Valerie Novakoff to promote investment in women-led productions."

Jesca was recently nominated for "Outstanding Director" by the San Diego Theatre Critic's Circle for her productions of Vietgone by Qui Nguyen and Actually by Anna Ziegler, both at San Diego Repertory Theatre in 2018. Both productions received several nominations in areas of design, performance, and overall production.  Awards will be announced at the annual Craig Noel Awards held Monday February 11, 2019.

James Herbert of the San Diego Union Tribune speaks with Jesca about her upcoming production of Actually by Anna Ziegler and how her work as a choreographer and documentary theatre maker has influenced her process in directing this show. This article was featured on the front page of the Sunday Arts section.

Walter Ang of the Filipino publication "The Inquirer" speaks to Jesca about her upcoming production of "Actually" by Anna Ziegler and other projects surrounding hard hitting issues faced by communities on a local, national and international level.

interview
The interval: "what i wore to get (and keep) the job"

Jesca speaks with lead actor Ben Levin and Ginger Jeffries on Good Morning San Diego about their process creating "Vietgone" and why this is the show to see in San Diego! Watch the full interview with clips from the production here.

Jesca will be developing the project "Nohing" which explores sexual assault in public spaces. While training in traditional Japanese Noh mask dance in Kyoto this past year, Jesca witnessed aggressive sexual harassment on a women's only train car. The victim's physical struggle to simultaneously protect, fight, and communicate silently with those witnessing reflected that of a Noh spirit. Nohing is a theater piece intersecting testimony, media, and Noh dance to explore the mask women wear to survive harassment. Nohing will use the interviews of female victims of sexual harassment as the trigger to create the piece through a devised interdisciplinary process incorporating the strong yet still movement of Noh.

Jesca recently did an interview with Ann Kaewta of Kaosod English, a Bangkok Arts & Culture website, discussing her process creating FAN: stories from the brothels of Bangkok, with Bangkok based physical theater company B-Floor. From the interviews they conducted in the sex industry to the devising process to the production, hear about how their unique documentary theater process HERE.

Jesca was featured on the Emmy-Award winning documentary series, Treasures of New York, which took viewers behind the scenes to explore the history and cultural influence of one of the nation’s great champions of the theater and performing arts: The Drama League. Hosted by broadway and film star Norm Lewis, the film premiered in PBS in March and follows her cohort of directors throughout their fall 2017 fellowship. See the whole episode by clicking on the link below.
Treasures of New York: The Drama League

Jesca was recently name as one of three recipients of the Julie Taymor World Theater Fellowship. Throughout 2017, she will travel to Thailand, Japan, and The Philippines to study forms of dance and puppetry. For the complete announcement on AMERICAN THEATRE MAGAZINE, visit:
Julie Taymor Announces 3 Recipients of World Theatre Fellowship

Jesca Prudencio joins the Drama League's Director's Project as a Fall Directing Fellow. She will embark on an intensive summer of networking or professional mentorship followed by assisting two professional productions Off-Broadway and at Regional Theaters. The Fellowship culminates in a Director Showcase where she will direct a one-act play.  For the complete press release on BROADWAYWORLD, visit:
The Drama League Reveals Recipients of 2016 Directors Project Fellowship 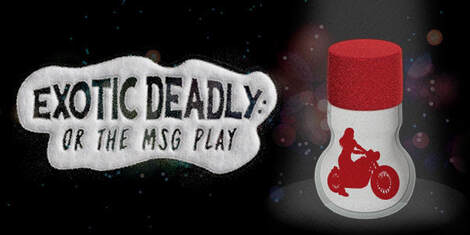 ​“The Hunchback of Notre Dame is a major Playhouse musical, but it’s also a new piece in development. I loved seeing the project evolve, expand and take shape. The director, Scott Schwartz, included me as an active participant by his side in the rehearsal and tech process. Sitting at the same table as the lyricist Stephen Schwartz and composer Alan Menken was an honor."
—Judy Piercey, ​Theater Residencies Enhance Resumes and Jumpstart Careers, UCSD NEWS

review & interview on
The Venetian Twins

"While the audience remains breathless from laughter, they also watch an interesting commentary about culture — about how “otherness” can make appearance, no matter what generation you exist in."
—Cecily Swason, "Jesca Prudencio Crafting Commedia," THE TRITON San Diego

"It’s hard to weave contemporary social issues into truly theatrical storytelling, but a company of graduate students from the University of California, San Diego, has done that beautifully with “Campo Maldito,” a comic ghost story with a conscience. Written by Bennett Fisher and directed by Jesca Prudencio, it’s set in the gentrifying Tenderloin district of San Francisco, where a young white tech entrepreneur (Walker Hare, excellent) calls on a Latino Santeria priest (Luis Vega, ditto) to rid his office of a spirit. The play runs through Saturday on the Lower East Side, where the resonances are unignorable."
—Laura Collins-Hughes, "Angry Ghosts, Pretty Mushrooms, Temperance Jokes," NYTimes
“…Intensely directed by Prudencio, Campo Maldito's two-man cast takes its audience on a riveting roller coaster ride through white privilege, around hairpin turns of desperation, careening downhill in a life-and-death struggle with the forces of addiction, and ending when dawn breaks over a terrified and confused alcoholic who is bottoming out. Walker Hare and Luis Vega turn in two grippingly athletic and memorable performances. Their work easily made Campo Maldito the most interesting entry I saw at the 2014 San Francisco Fringe Festival.”
—George Heymont, "Theatre of the Seriously Disturbed," Huffington Post